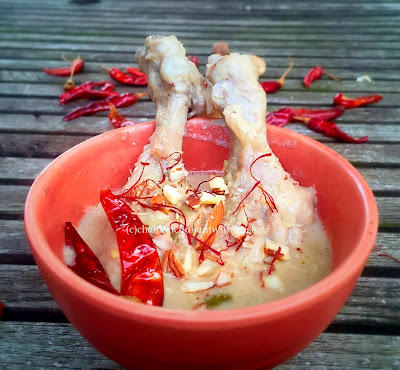 Chicken Rezala is a very popular dish in Bengal and a signature dish for few old restaurants of Kolkata. Chicken Rezala has become a part of Bengali dish though one can’t ignore the Islamic touch in this. As it is said, descendants of Tipu Sultan and Nawabs of Avadh fled to Bengal during British regime. And they brought their cooks who rendered delicious food which mixed best of both Bengal and Awadh. Like Bengal. Awadhi style also liberally uses Kewra water.

When I went to India this summer, I was invited to my very close friend (may I call soul-sister), who is an accomplished cook herself. She had served Chicken Rezala with Basanti Pulao (yellow colored Pulao in Bengali style). It also goes well with Paratha, Naan or Biryani. Same thing can be cooked with mutton also to make Mutton Rezala.

1. Cover the chicken with salt, white pepper powder, ginger garlic paste, onion paste, curd. Let it marinate for 3 hours.
2. Heat clarified butter in a pan. Add garam masala (cloves, cardamom, cinnamon and bay leaves).Now add onion paste, ginger garlic paste (1/2 of the quantity)and cook till raw flavor is gone and oil starts separating from the mixture. Now add white pepper powder, salt, chopped green chili, cashew nut, poppy seed paste and curd.
3. Add marinated chicken to the above mixture. After sometime, it will start releasing water. When water comes to boil, put the lid on and let it cook for 30 mins in a low flame.
4. Once chicken is done and some water evaporates, add garam masala powder and cook till chicken is tender.
5. In parallel, heat oil in another pan. Now add red chili, onion rings and sprinkle some salt. Cook till onions are brown and pour this on the top of the chicken and cook it for 2 to 3 mins .Now add saffron and kewra water and switch off the flame.
6. Grate Almond in thin slices and garnish the Rezala with that before serving.

Tips:  Do not use any red-chili powder or Kashmiri Mirch in this recipe or else Chicken Rezala will lose its color.

Chicken Rezala is a very popular dish in Bengal and a signature dish for few old restaurants of Kolkata. Chicken Rezala has become a ...